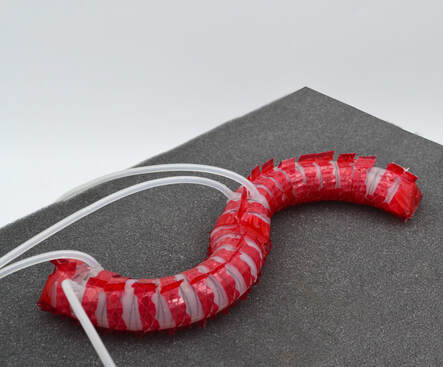 My main research at Oregon State University is the development of soft snake robots, and how we can use specific environmental interactions, such as friction, to improve locomotion capabilities through complex environments.

A geometric mechanical model allowed us to explore different gaits, and determine an optimal gait for the robot that is dependent only on the drag ratio (lateral vs. longitudinal) and the shape space of the robot. The optimal gait is some form of lateral undulation which is the serpentine locomotion strategy most often associated with snakes. However, snakes will often alter their gaits depending on the environment in which they are navigating. Therefore, we are also exploring how biological snakes will control the parameters of the wave they propagate along their backbone to produce effective locomotion in varying environments, and how we can replicate this on our robot.

To expand the robot's locomotion capabilities across different environments, we needed to explore anisotropic friction which is a trademark of biological snake skin. I designed a flexible skin that could be wrapped around the soft actuators that relied on kirigami strategies to produce out-of-plane buckling of the scales, providing anisotropic friction. The frictional properties of the skin can be tuned to produce different ratios the axial and tangential components of the frictional force that are currently being used to optimize locomotion over a range of different surface roughness samples. The current, highest performing skin increases velocity compared to a robot with no skin by 335%. Research is ongoing to further optimize the frictional properties of the skin.

One major problem in soft robotics is the consistent manufacturing of soft actuators. We are using the development of the snake robot to research manufacturing methods to limit inconsistencies, and subsequent behavioral quirks, that arise from fabrication. These methods include improving the molding process, 3D printing soft silicone elastomers, and developing jigs for assembly of components. Specifically, maintaining wall thickness, alignment of actuators, and control over the deformation of the material are all important in producing the desired behavior of the robot. Current manufacturing methods have increased replicability and successful operation of the actuators by 50% and can be mastered quickly by researchers new to the field.

Another open problem in soft robotics is control and actuation methods. The current soft snake robot is actuated pneumatically. It consists of four actuators that, when inflated, cause bending in the opposite direction of the inflated actuator. Though pneumatic operation is efficient and powerful, it presents problems in untethering the robot, which is necessary for applications in navigating unstructured environments. We are looking into miniaturizing our current pneumatic setup in order to place the necessary components on board. Controlling the robot presents many challenges as the nonlinearities that are inherent in the soft material do not allow for accurate models and simulation. Current strategies in soft robotics relies on observation and trial-and-error methods. We are exploring the production of control models in collaboration with Dr. Ross Hatton's lab here at OSU using geometric mechanics. By using the geometry of the robot, and assuming that the dynamics of the interactions between the robot and its environment are dominated by drag effects, we can build a model that allows us to explore potential gaits based on the shape space of the robot.
Powered by